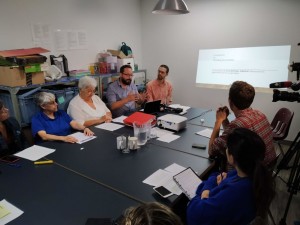 Montreal, August 28th 2019 – At a press conference held this morning, on the eve of a hearing at the Régie du logement requesting their “temporary” evacuation for 12 months, Montreal tenants testified of attempted evictions that they have suffered for months on behalf of LS Capital Group, after the company bought their buildings. The tenants who testified live in three buildings belonging to the company, where 11 of the 33 apartments are still inhabited by the same tenants as before the acquisition in the districts of Verdun and Côte-des-Neiges. The Citizens’ Action Committee of Verdun (CACV), a housing committee of the neighborhood where the majority of the buildings are located, and the Popular Action Front in Urban Redevelopment (FRAPRU) support the tenants and denounce the systematic use of alleged major work for the disguised eviction of tenants.

“A few years ago, we didn’t often see a real estate developer buying a block and putting all the tenants out, but since then it has become much more common and systemic” says Steve Baird, community organizer at the Citizens’ Action Committee of Verdun .

L.S. Capital Group acquired at least 7 buildings in Verdun and more than 200 housing units in Montreal. They’ve already boasted on their that they specialize in evicting tenants. The tenants in attendance presented evidence, including copies of the web page where they boasted of a 95% tenant removal rate. “Following our first requests, harassments methods including unfounded legal threats on behalf of the company multiplied. This caused a lot of stress to me and all my neighbors” testifies Félix-Antoine Carignan, 3rd Avenue tenant.

In a Decarie Boulevard building where some tenants still live in, an order to stop the work which was in progress since July was issued by the City yesterday, August 27, 2019.

According to the CACV and FRAPRU, this situation is explained by the desire of developers to take advantage of the frenetic real estate development in the southwest of the island to make more profits. In addition to experiencing the insecurity caused by the gentrification that affects their neighborhood, and undergoing various pressures linked to real estate speculation, Verdun tenants who have to relocate face a major housing shortage. While the general vacancy rate in Montreal is 2%, it is 0.6% in Verdun according to the most recent data from the CMHC rental market report for fall 2018. This is a drastic drop in a few months, since it was 5% a year earlier. In this context, the CACV and FRAPRU fear that several tenants, in particular those with low incomes, will be chased out of their homes.

Montreal and Quebec are called upon to put measures forward.

“The affordable rental stock is crumbling in all Montreal neighborhoods and it is urgent that the city and the Government of Quebec do everything in their power to protect these homes and the tenants who live there” commented Véronique Laflamme, the spokesperson for FRAPRU. According to FRAPRU and the CACV, stronger measures are necessary to prevent the systemic use of major works in order to evict tenants in a context of unbridled speculation and housing shortage. When the Quebec Government is in the process of revising the Act respecting the Régie du logement, it would be time to strengthen the protections provided to ensure the right to maintain occupancy and better protect the rental housing stock. Organizations point out that Montreal also has a role to play. Thus, the boroughs should carry out systematic verifications before granting major work permits and the Ville de Montréal could also request additional powers from Québec in order to be able to exercise judgment on the nature of the work.

Finally, the organizations requesting the establishment of effective rent controls and a lease register that would not only better equip tenants to counter excessive rent increases, but also, in the case of the register, to municipalities better monitor the rental housing stock.

According to the two groups, to counter the dramatic effects of gentrification and the shortage of rental housing, the construction of social housing must be accelerated. In this regard, the CACV recalls that, while 3,200 tenant households in the Borough devote more than 50% of their income to housing, Verdun has accumulated a significant deficit in social housing. According to the latest data from the Montreal Municipal Housing Office, 766 households are on the waiting list for low-cost housing in Verdun. The community group is concerned that there are no solutions to meet the needs of low and modest income tenants and those who have to vacate their accommodation, as it can take several years before getting social housing in the neighborhood. The CACV says that buildings should be acquired for social housing, in order to preserve a place for everyone in the neighborhood. We should remind ourselves that the City of Montreal has acquisition powers that it can use to resell to social housing developers, but that it has not used these powers in Verdun for more than six years.

For more information or interview requests: 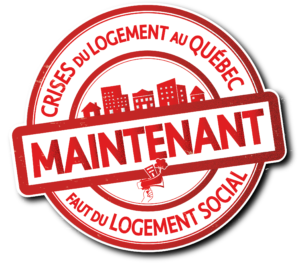